Who we are Vision & Mission How we do? Contact

The Andhra Pradesh Forest Department (APFD) came into existence on 1st November 1956 with the formation of a separate state of Andhra Pradesh. Earlier it was part of Madras state during the British era as well as post -independence. The APFD was headed by Sri Daulat Rai (1956-60), who was the first Chief Conservator of Forests.

On June 2, 2014, a new state of Telangana was carved out of Andhra Pradesh. The APFD also got divided with Sri A.V.Joseph IFS (2014-15) as the first Principal Chief Conservator of Forests & Head of Forest Force.

Presently, the APFD is headed by Sri Y.Madhusudhana Reddy IFS, Principal Chief Conservator of Forests & Head of Forest Force. He is a 1990 batch IFS officer.

The State is ranked 8th in terms of the Recorded Forest Area (RFA) which is 37,258 sq km. Reserved Forest, Protected Forest and Unclassed Forest constitute 31,959 sq km, 5,069 sq km and 230 sq km of the RFA respectively. 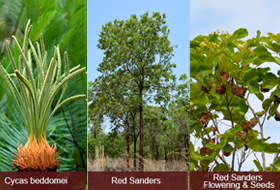 The State possesses wide and varied vegetation types enriched by a variety of flora and Andhra Pradesh being located strategically in the central region of the Indian sub-continent has representatives of the magnificent Indian plant and animal life. Its varied topography ranging from the hills of Eastern Ghats and Nallamallas to the shores of Bay of Bengal supports varied ecotypes, which in turn support a rich diversity of flora. The state of Andhra Pradesh is considered one of the rich biodiversity states in India. In Andhra Pradesh, vegetation that is seen usually belongs to dry deciduous form of vegetation that is a mix of Teak and a variety of species belonging to genera Dalbergias, Terminalias, Anogeissus, Pterocarpus, etc.

Mangroves form an important eco-system in East Godavari, Nellore, Krishna, and Guntur districts. Andhra Pradesh has about 3188.74 ha. of mangrove forests. The predominant mangrove species include Avicennia marina, Suaeda spp., Rhizophora spp., and Bruguiera spp. These have a thick canopy and an undergrowth of climbing plants and shrubs.

The total Carbon stock of forests in the State including the TOF patches which are more than 1 ha in size is 219.53 million tonnes (804.94 million tonnes of CO equivalent) which is 3.08 % of total forest carbon stock of the country. Indian State of Forests Report 2019.
Flora of Andhra Pradesh - by RD Reddy & Md Sharfuddin Khan 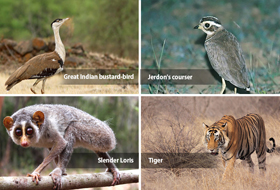 The long sea coast provides the nesting ground for sea turtles like Olive Ridley turtles. The back waters of Pulicat lake are the feeding grounds for Flamingo & Grey Pelican, the estuaries of river Godavari and Krishna support rich mangrove forests with Fishing Cat and Otters as key stone species. Similarly the Double banded or the Jerdon’s Courser, the Golden Gecko, the Slender Loris which are rare and endangered are endemic to the state.

The total Carbon stock of forests in the State including the TOF patches which are more than 1 ha in size is 219.53 million tonnes (804.94 million tonnes of CO equivalent) which is 3.08 % of total forest carbon stock of the country. Indian State of Forests Report 2019.

Andhra Pradesh has 3 National Parks and 13 Wildlife Sanctuaries covering an area of 7,311.08 sq km which is about 4.49% of the geographical area of the State. It has fauna like Tiger, Gaur (Indian Bison), Great Indian Bustard, Lesser Florican, Jerdon’s Courser, Golden Gecko, other avifauna like Flamingo, Pelican etc. It has the largest Tiger reserve in the country i.e Srisailam Tiger reserve, and the second largest Mangrove eco-system in the country (Godavari and Krishna Estuaries.) Wildlife & Eco-tourism